How do you take the insights you’ve gathered from an interview, and translate them into workable, testable design decisions? I’m going to start really high-level here, and then drill down to a few tactics.

Synthesis is a form of sense-making about the world. It forms the core of the design process. Yet it is something you and I do every single day, regardless of our career paths or design know-how.

I live in a city that is working out a massive tension between active transportation methods – public transit, walking, biking – and driving in a car. There are numerous intersections where all of these transportation methods collide. Here’s one, Armitage/Western/Milwaukee, where three bus routes (including two of the most-used ones), three major streets, the longest and second-most-used El route, the busiest bike street, and the busiest pedestrian commercial corridor on the Northwest Side all overlap one another: 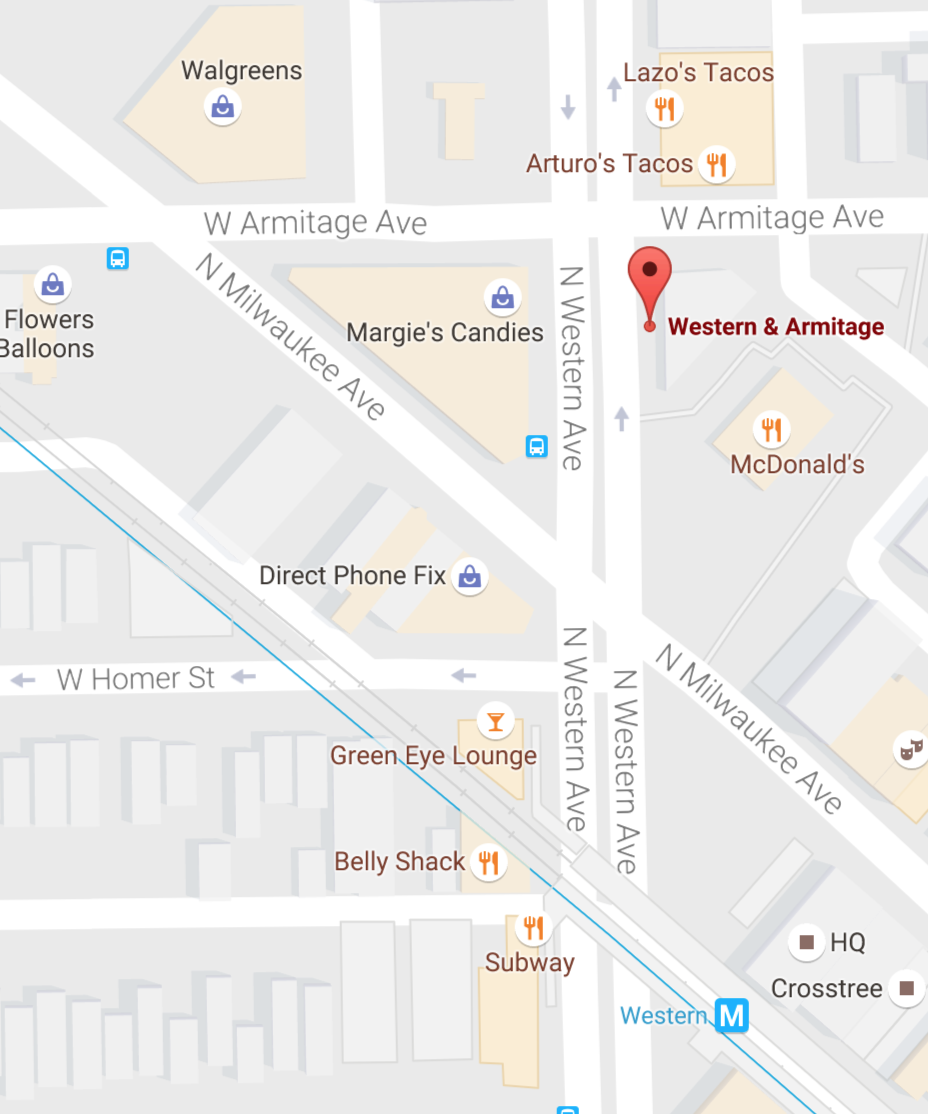 This is drastic but not uncommon.

The Chicago Department of Transportation has been munging the traffic light timings here – of which there are six, comprising two sets of lights for each intersection – for the better part of a decade. Yet significant traffic persists on most sides of this intersection, for most of the day.

Why? Because changing the light timings is cheap to do. But it also provides insufficient results. It’s an incremental, piecemeal solution. It doesn’t address the root cause. No matter what the light timings are, one group – drivers, buses, bikers, etc – ends up severely delayed.

The root cause is that there are multiple modes of transportation that operate in significant volume. They all have different motivations and intentions. They all have different densities and proportions of traffic, too: Milwaukee is extremely popular for bikes, but biking anywhere on Western Avenue is a death wish. If your budget was $200 and you had no interest or ability in addressing the root cause, you would change the light timings over and over, and claim you were fixing the problem.

If you used design thinking to solve the problem, though, you would look at the different groups of people who go through the intersection, ask them questions about their commutes, assess the relative pace of each of those commutes, and try to create a more workable solution that might involve street reroutes, viaduct flyovers, broader streets, and so on. Then you would have to implement your solution. The budget for this would be significantly more than $200.

This isn’t theoretical. Contrast Armitage/Western/Milwaukee with Damen/Fullerton/Elston, a decade-long project that culminated with rerouting one of the three streets around a hazardous intersection. This required significant permitting, land acquisition, rezoning, and aldermanic approval.

Most noteworthy, the Chicago Department of Transportation addressed Damen/Fullerton/Elston like it was a design problem. They observed existing behavior. They said “hey, this behavior might improve if we changed this intersection in this particular way.” There’s no way to know for sure until the reconstruction is finished, but they have a pretty good guess about it.

Changing the light timings on Armitage/Western/Milwaukee is like saying your headline might fare well if it’s “more persuasive.” Bulldozing a parking lot and five buildings to reroute Elston is like saying “hey, this value proposition needs to be changed.” Or “this page needs to be redesigned.”

Which one takes more effort? Which one is the bigger risk? Which one requires placating more stakeholders? Which one generates more results?

How do you settle on a particular solution?

So, design thinking appears to be risky from the outside. But it also does a bad job of expressing itself to most people.

There’s a comic strip that I frequently cite, where two scientists are picking apart a complicated process, and one of the steps in the middle reads “then a miracle occurs.” 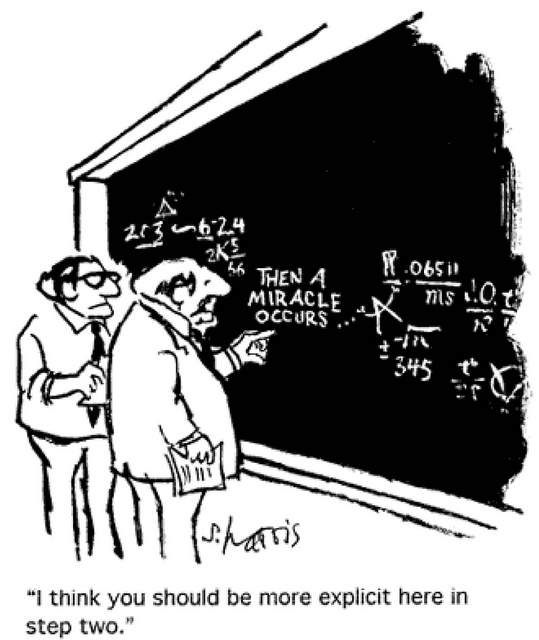 This is how I suspect design feels to a lot of non-designers.

You’ve probably heard of deductive thinking before. That’s the one where you have a pretty simple logic puzzle: “if A, then B; if B, then C; therefore, if A, then B, then C”.

And you’ve probably heard of inductive thinking before. That’s the one where you observe a condition and make an inference: “Every time A happens, B occurs. Therefore, the next time I do A, B will occur.” You flip a coin 99 times. Heads appears 99 times. Will it appear the 100th time?

Abductive thinking requires making an informed guess, based on what you already know about the world. “If A, then B” is not enough. According to Jon Kolko, in this post:

I’ve done something like A before, but the circumstances weren’t exactly the same.

I’ve seen something like B before, but the circumstances weren’t exactly the same.

I’m able to [conclude] that C is the reason B is occurring.

C is not part of the original set of information. C is a guess based on a combination of observed phenomena, prior data, and prior experience. And you might be wrong, even if the underlying cause is true.

(By the way, the rest of that Jon Kolko post does a terrific job of summarizing abductive thinking, outlining why designers’ work often goes unrecognized, and lays out specific ways to get others involved in the design process. I can’t recommend it enough.)

So, let’s go back to our intersection. Rerouting Elston might be a costly, years-long disaster. But you have a bunch of urban planners on the case, making specific design decisions, both granular (adding a sorely-needed protected bike lane to Damen) and broad (rerouting Elston, demolishing five buildings). They have done this based on what worked before (adding protected bike lanes has reduced fatalities in the past), as well as what they personally experience (presumably all of CDOT’s employees have driven in Chicago before, so they understand driver attitudes).

Note how constraint-focused this is. You have a certain set of conditions, and you have to work within them. What happens if the conditions change? What does that do to your ability to communicate with prospective customers?

I Am Going to Talk About A/B Testing Now

These are all new constraints that you bring to a problem – which allows you to gather new insights. Applied to the interview you probably just conducted, here are the questions I ask of each and every interview I perform:

It’s very okay if the answers to these questions vary from participant to participant. Why? You’re trying to get a broad range of perspectives. Maybe you do get an outlier who hoards your product and won’t stop talking about the artistic trajectory of your creative director.

One goal of this is to clear your head of all prior thinking of how you sold your product. Perhaps your branding worked five years ago – and it doesn’t now. Perhaps it works for some people, but not for all.

But these questions also help you figure out what to do about it. That’s where prior experience (and abductive thinking!) comes in. From the sets of answers you just wrote down for each interview, write up at least five significant design constraints that you think these customers would impose on the business if they were given free rein. Like one-handed food for people who refuse to let go of their smartphones. Or having SIM cards delivered by mail to women who live private lives in Saudi Arabia. Good synthesis makes you think “oh no, our customers think this way. What do we do about it?”

Finally, try to sketch out a design that fulfills those constraints – while still representing your business’s needs and broader goals. Does it fit with your existing marketing? Is it a direction you want to go right now? Or should you roll it out alongside the existing design? This is why testing is so important – it helps you understand the overall economic impact of a decision, so you can see what it does to your outliers, your addressable market, and your existing demographics.

The more experience you have with others’ marketing pages, the better – which is why it frequently helps to hire design experts. Even so, anyone can do this. I don’t think I have any sort of clairvoyant magic that allows me to abduct better than anybody else. Most of the time, I just use common sense. Design insights often look blindingly obvious.

But if you do all this right, maybe you’ll end up with an intersection that kills fewer people. Or a website that sells more stuff to happier customers. Whichever you want.

← Back to the Blog Check Out Draft’s Store →